I have now combined A1-CO2 in sequence with A2-CO1 to form the A3+CO1. It is the A-Habit that has an acton (A3) that points to the actons A1 and A2. The new A-Habit has a trigger of CO1 and a goal of CO1. It's a loop. It is interesting because of the + sign and it is novel, just created. CO1 is familiar and does not attract attention.

However I need to have A3+CO1 executing so that the next CO2 will be inhibited. But the Name stimulus attracts attention. Should I not have no attended to stimulus when an active / conscious action habit gets its goal? Or in other words should I keep on attending to a goal stimulus after an action habit completes?

Or should all known action habits for all familiar stimuli be started and not just the ones for the attended to stimulus. In this case the Name stimulus has none.

Or should I change the criteria for stimuli that attract attention to include stimuli that have action habits with a redo interest.

If instead of starting the A3+CO1 (in practice / conscious mode since it has not been proven, still interesting) at this point I go on to create A-Habits for the Name #1 stimulus repeating and the Time stimulus pattern what happens to the Contrast stimuli? Because they are familiar the contrast STM creates sequences and starts counting the repeats. If they were expected by an active subconscious action habit they would be inhibited and not counted.

Another possibility is that the consciously active A-Habit does not inhibit its expected goal stimulus. Only subconscious ones do that. This would allow the goal stimulus to be combined sequentially with the preceding stimulus in STM.

I've tried this and at this point the S-Habit representing the loop (CO3) is formed as novel, then the A-Habit A3+CO1gets formed to recognize the loop and the CO3 attracts attention and becomes interesting. It is now paying attention to the CO3 that has no action habits. But maybe the action habits associated with the parts of CO3 are found - specifically the A3+CO1 that has redo interest. Isn't this what happens when you come across a new situation, part of which is familiar? 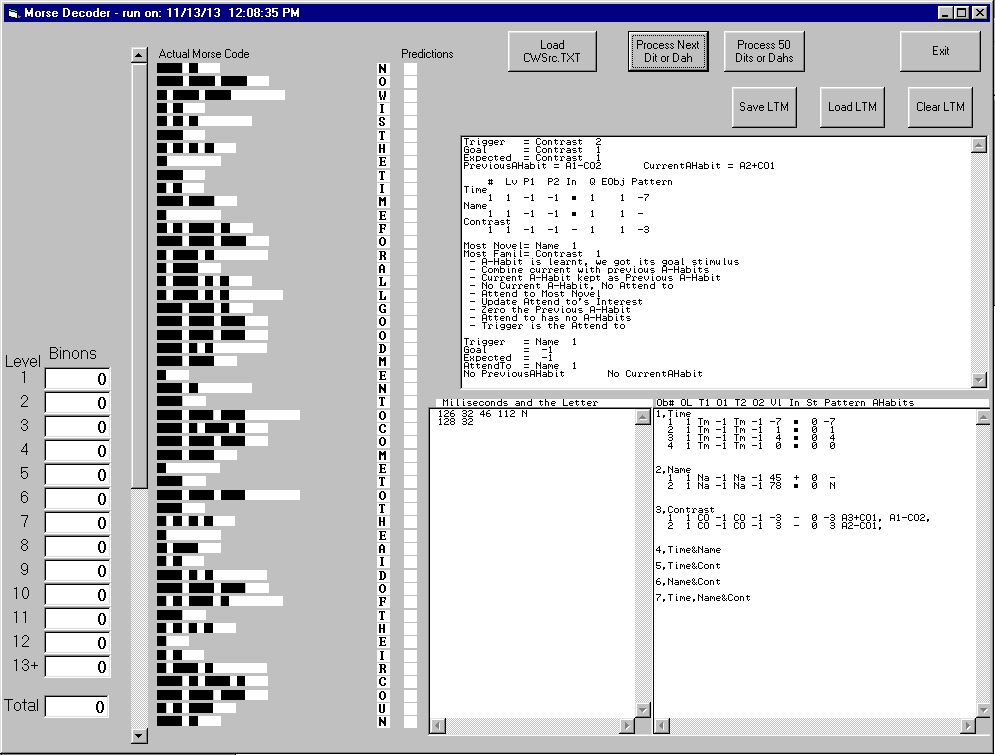