145. The short term memory could act as a memory which passes onto main memory those experiences or learned sequences which turn out to be complete or produce a required level of importance. The "passing on to main memory" could be made compulsory by the brain mechanism (central control) or could be left to the requirements at any time. ( See 163 ) 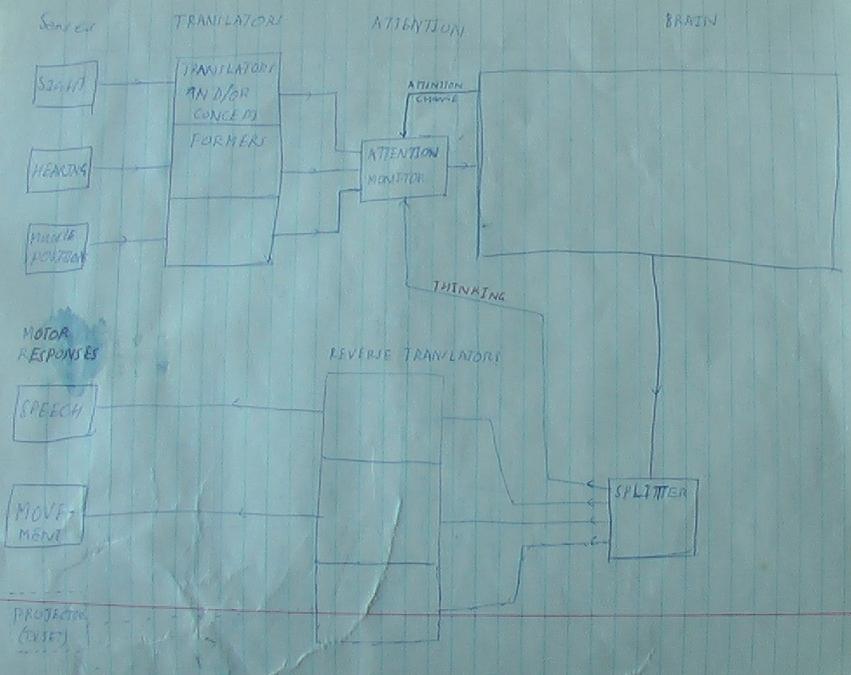 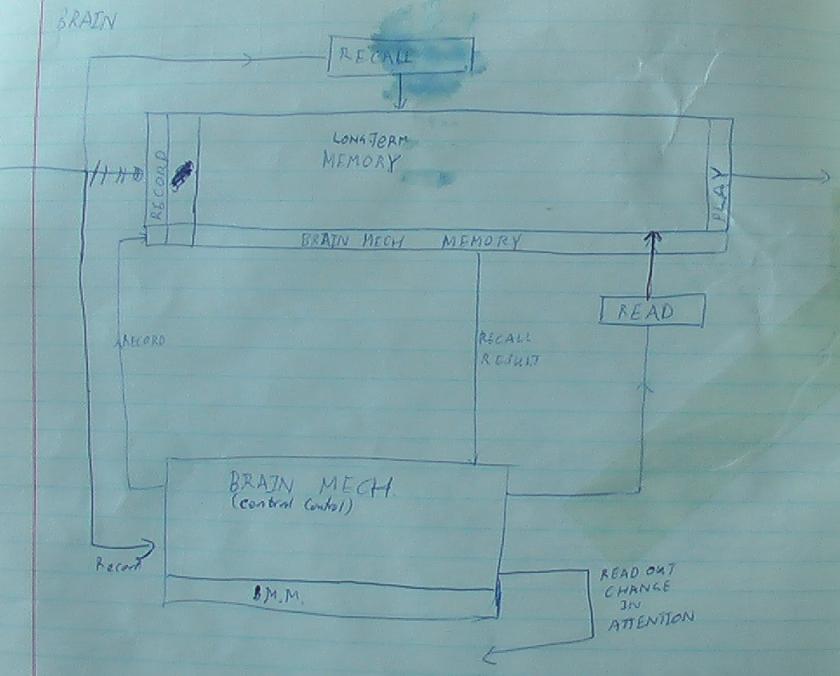 146. From 92. For man to overpower his reflexes his mind must concentrate on the thing he is trying to do. The mind gives a constant command to do the thing and only when the mind starts to pay attention to something else does the reflex action come into being and act as it normally does.

148. The Brain mechanism is chiefly associated with STM and all the analysis and operations it performs are on STM. Let us say STM will be 5 frames long and central control can manipulate and do extra processes especially on STM which it can not perform on LTM.

149. From 108. There is a need to do this. There are 3 ways one can conceive of STM. 1/ as the head end of the LTM storage and all the frames have been wired so that STM can exist on any 5 frames at a time. Thus we have a lot of excess wiring which will only be used once, when STM passes by that spot.  2/ A travelling wired up mechanical mechanism which shifts along the rows of frames. This requires precision mechanisms and also requires that the string of frames be all joined physically as well as electrically. 3/ The best idea is to separate 5 frames with all the special wiring necessary which will act as the STM or central control and when recording have been analyzed sufficiently they are transferred into LTS. This means all the input to the brain enters STS first.

150.  From 109. If we are talking we do not pay attention to what we are hearing. Our attention is internal, that is we are thinking, our STS is analyzing, it is presenting concepts to the brain and hunting for the words which are associated with the concept and then STS is reading out those words. STS is not paying attention to the words spoken by listening to them. However when one is paying attention to how one is moving or feeling one can do this because the movements are under control of the automatic system and do not require the processing by STM. This means one can look at ones hands moving while they perform a simple task.

152. From 111. I believe we are endowing it with the capacity to think, the problem will lie in how we will get it to learn to think. It might be a good idea for me to design the robot with all the emotions and likes and dislikes as it works in man and then remove as much of it as possible and still have our robot learn and its brain mechanism learn how to think (see idea no. 144).

154. From 113. The recall mechanism operated by STM definitely is able to search or recall from LTM information which is from a particular sense. i.e. one can pick out the taste associated with an apple or the word associated with an apple or the picture of an apple separate from each other. i.e. the BM has an idea of what it wants, it knows the sense of the association it is after. (See Question 2/ - 127)

155.  From 115. Sight associated with sight? We are able to read off a whole string of associated sights, like in recalling a familiar building. (See 147)