Associations must follow cause and effect rules. i.e. associating an input with a thought is not logical. Reward and idea of reward must be used to give strengths of association only for logically associated things.

Things can be recalled because of recency, strength of association and context. ( What about frequency? - 1st Oct 1978) Presently context is not used. Strengths - only one of each channel of data is recalled not using strength as criteria. It uses recency only for data on same channel. Strength is used for choosing between recalled data on different channels not used to divide data on same channel.

Put a front end on input so no two inputs can come in the same. Only accept same input if attended to via execution. It is irrelevant whether did any other thoughts between two inputs.

If it’s many times repeated, not restored each time, only reuse old execution trace.

- I/O has higher priority than thinking

- Need reflexive output of last thought of output, Reflexive motor should check idea of output first for source of output.

- If store of output does not cause a recall to take place then neither should store of idea of output since one is meant to be the model of the other.

Try a system where store of output causes no recall. Recall of output always done, stored as output. 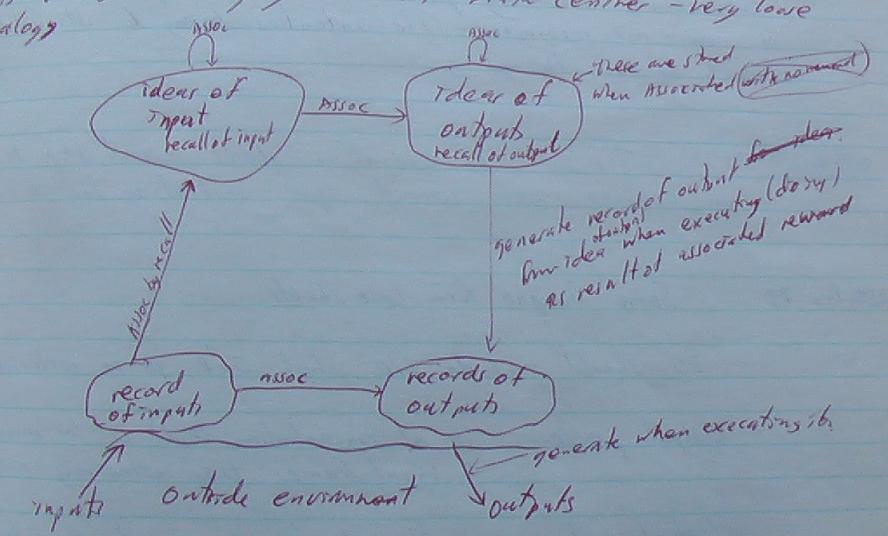 - Ideas of Input and Output are generated reflexively when attention attracted to them. But when they are executed do we get a record of I/O just as what was done reflexively or do we get the associated idea of I/O? What about when executing, we first check record of I/O and if not there check for idea of I/O.

- Also when executing an idea of output 1st check record if any then check idea if any. Which ever is obtained, stored and remembered is also kept around so that it can be output if no other associations occur.  This means a reflex exists to output the last thought about action if nothing else attracts one's attention.

The ultimate desire of the mind is to generate sequences of responses which can be executed on the cue of an input. The sequences would be the final product of the learning process and would work correctly. The learning mechanism must still be ready, though, to learn new things if the situation should change.